“The 100th Monkey and your Company’s Culture…” 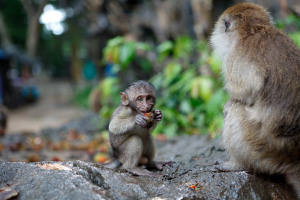 “I’m so tired of eating these sandy sweet potatoes! The sand gets in my mouth and crunches between my teeth…. Ughhh, how annoying!”

“Hey, little brother, you should be happy that we have sweet potatoes. You’ll NEVERlike the crunch, but you’ll LEARN to live with it!”

“Well, I just think there HAS to be a BETTER way…”

“It’s been that way since before I was born and before our parents too. Don’t you think that if there was a better way, that one of the troop elders would have already discovered it?”

The young monkey turned away from his older brother and walked off toward the beach. Within seconds a Sea Eagle swooped down from high and plucked a crab just inches from the young monkey.

He tossed his sweet potato high into the air and darted back toward the palm tree. Panting heavily he watched the potato for the next 20 minutes as the waves worked their way up the beach and eventually started gently rocking his sweet potato.

“Hey young one, I think the Sea Eagle is gone and I’m sick of hearing your belly growl. Why don’t you go grab your sweet potato before it gets washed away…”

The young monkey looked up into the sky and saw only the sun. He took a deep breath and bolted across the sand, into the mellow surf, snatched his sweet potato and bounded back to his older brother.

Just then his older brother snatched his sweet potato and chomped off the top half.

“Wow little brother, your sweet potato is really good and my teeth didn’t CRUNCH together! This is the BEST sweet potato I’ve ever had…”

These two monkey brothers looked at each other and shouted together…

The next day, they walked down to the beach with their hands full of sweet potatoes and began dropping them in the waves. The elders of the troop LAUGHED and MADE FUN of the two brothers from under the palm trees day after day after day.

“Look at the young one and his brother. They are so STUPID! HaHaHa”

Their laughs echoed across the water.

Eventually, one by one, each of the troop elders joined them on the beach to wash sweet potatoes each morning.

Moral of the Story:

Embrace new ideas to old problems or you will be eating sandy sweet potatoes until you die! If you are lucky… #Hahndo

Culture Tip: Culture simply stated is “HOW WE DO THINGS AROUND HERE”.

Corporate & Team culture is impacted by the BELIEFS & BEHAVIORS of the people you work with everyday.

If people are saying one thing and behaving another… the BEHAVIORS win every time….

What advice do you have for the young monkey’s of the world?

Michael is a Motivational Speaker and Culture Transformation Expert who leverages leadership stories from World Record Skydivers, World Champion Martial Artists and the Best of the Best Corporate leaders to highlight leadership principles across boundaries…

Check out his keynotes @ www.MichaelHahnSpeaker.com

About the Author: Michael Hahn